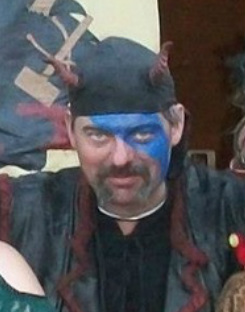 Vincent Krava (aka Saytr McNaughton) began his journey into Blacksmithing as a Farrier over twenty years ago.  The first thing he learned when starting his apprenticeship was how to make horseshoes. Over time and countless shoes later he began experimenting with some other designs, mostly as gifts for friends and family.  In 2009 Dragon's Head Forge was born, debuting its' first vendor/demonstration act at The Great Lakes Medieval Faire; in 2010, the Great Geauga County Fair was added to the annual itinerary, and The Ohio Renaissance Festival was added later in 2012.  Vincent makes a wide variety of items, specializing in custom designs for clients.  He has become known for his creative ideas and eye for the unusual. Vincent prefers projects with an organic feel and also aspires to create things often associated with fantasy.  His works have been described as beautiful, strange, and even wicked.  His works are always made to the client's specifications but Vincent insists on some artistic license for specialty weapons and other unusual projects.

Vincent is a member of the Western Reserve Artist Blacksmith Association.

Erika Brownfield - Co-Founder and Mistress of the Forge 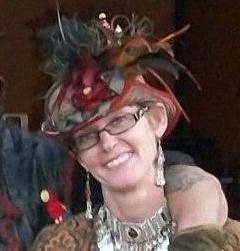 Erika Brownfield, the driving (whip wielding) force behind DHF, first met Vincent in 2006.  After a few years of discussing the idea of creating a business centered around Vincent's craft, plans were put into motion to begin demonstrations in 2009 and has been growing ever since.  Erika does work at the forge when she can but her time and skills are primarily focused on fair set up, administrative functions, sewing, leather work, and adding color to our pieces.

Erika is a Veteran of the US Navy and member of the Western Reserve Artist Blacksmith Association. 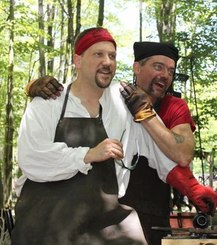 Todd started blacksmithing in 2008 after watching a good friend work at his forge, and decided that it looked fun and interesting.  He started out in a basic class at Touchstone Center for Crafts near Uniontown, PA.  Todd quickly joined the Artist Blacksmith Association of North America and the Pittsburgh Area Artist Blacksmith Association.  Todd joined Dragon's Head Forge at the Great Lakes Medieval Faire in 2010, working alongside Vincent, conducting various demonstrations, selling his own wares, and collaborating with Vincent on various projects.